Franklin De Vrieze of the Westminster Foundation for Democracy discusses the use of post-legislative scrutiny to combat human rights violations.

Strengthening the promotion and protection of human rights can benefit from a correct assessment of the implementation of legislation, identifying its impact, remedying possible gaps and addressing unintended consequences of legislation. When visiting Indonesia recently, I learned that some human rights problems emerge because, among others, implementation of legislation gets stuck and discriminatory practices are entrenched at the level of sub-national secondary legislation or delegated legislation as issued by the provincial governments in the country. Human rights implementation often suffers from poor understanding of the law, gaps in legislation or reliance on local discriminatory patterns. To overcome such challenges and to ensure that citizens benefit from equal opportunities and equal protection under the law, there is need for a more comprehensive approach to Post-Legislative Scrutiny (PLS) which fully considers discriminatory secondary legislation at sub-national level. 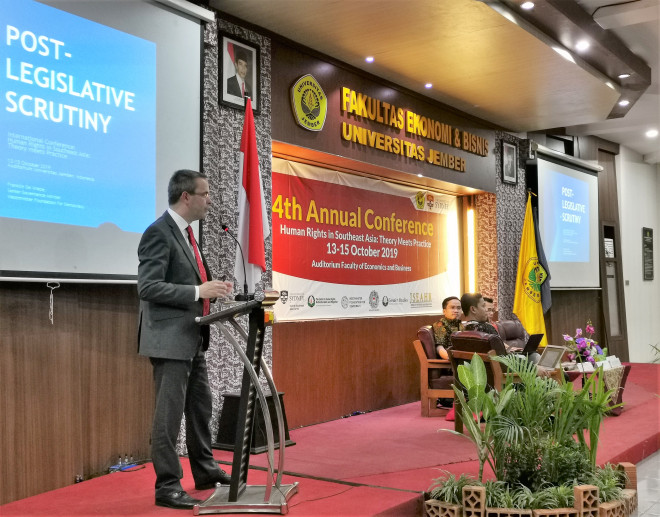 It was noted that the Association of Southeast Asian Nations (ASEAN) doesn’t enforce mechanisms to protect human rights in the region because of ASEAN member countries’ shared position on preserving state sovereignty. Some Southeast Asian states challenge the universal application of human rights by referring to the preservation of stability or social harmony over respect for individual human rights. Even countries that have amended their constitution to align with international human rights instruments have struggled, since implementation is influenced by gaps in legislation as well as by developments in the economic, social, cultural, religious, and political spheres.

Therefore, a thorough assessment of the implementation and impact of legislation is even more important as well as the review of the synergy between the sub-national regulations with the national laws as well as compliance with constitutional provisions related to human rights. In my conference contribution, I quoted Lord Norton: “Public expectations of parliaments’ legislative success have evolved substantially, from getting laws on the statute book to ensuring that laws are brought into effect and their implementation has an impact.” (expert seminar on legislative impact assessments, WFD and University of Hull, April 2019).

In September 2019, the national parliament of Indonesia (DPR) adopted amendments to the Law on the Legislation-making Process. It requires the national and sub-national governments and parliaments to conduct PLS on the laws and regulations which they pass and implement. Previously, PLS was only conducted by parliaments as required by the Law on Parliaments. The adoption of PLS into the law-making process in Indonesia resulted from WFD advise to the Legislation Committee of the DPR on improving the legislative framework and adopting a legislative cycle approach.

PLS pilot projects are about to commence in four sub-national parliaments, including two in East Java and two in South Sulawesi. The Centre for Human Rights, Migration and Multiculturalism of the University of Jember is partnering with WFD in implementing the PLS pilots, which will include developing a training module on ‘PLS using human rights criteria’ and using it to train all sub-national assemblies, and conduct further research of the selected local legislations to be scrutinised. Local CSOs will participate in the PLS pilots, thus strengthening the diversity of the sources of information and the outreach.

Experiences in other countries applying PLS are encouraging. During my conference contributions, I mentioned examples from the UK, Cape Verde and Uganda. The UK House of Lords’ PLS of the Equality Act (2010) focused on the rights of persons with disability and secured the implementation of key provisions for equal access to transport for persons with disability. In Cape Verde, women MPs secured more resources and new secondary legislation to ensure implementation of the Law on Gender Equality (2011), alongside a new roadmap on the national gender policy. In Uganda, the PLS of the Prohibition of Female Genital Mutilation Act (2010) highlighted the importance of conducting sensitization campaigns more broadly, assessing the financial implications of legislation in more depth, while recognising the limits of legislation in changing deeply rooted traditions and customs.

Experiences in various countries indicate that PLS is not a “luxury good”, beyond the reach of newer or less established parliaments. Parliaments at various stages of institutional development have undertaken PLS successfully, and the reason for that is that PLS is undertaken in a wide variety of ways, in accordance with the legal framework, parliamentary practice and available resources. PLS thus becomes a useful tool to combat discrimination and human rights violations.

The conference provided an opportunity to put forward a new, human rights-mainstreaming and gender-mainstreaming approach to PLS. Such approach includes the application of a Human Rights Impact Assessment (HRIA) as an instrument for examining policies, legislation, programmes and projects to identify and measure their effects on human rights. HRIA could be an ex-ante assessment. However, most HRIAs so far have been ex-post assessment. Like other forms of impact assessments, HRIAs are an evidence-based exercise, which aim to contribute to a more informed policy-making process. It will be the subject of WFD research and policy advise in the coming year.

Concluding my stay in Indonesia, I also engaged with the Committee of Local Legislation Affairs of the Upper House, which has acquired new competencies in evaluating local regulations from the point of its efficiency and compatibility with primary legislation. 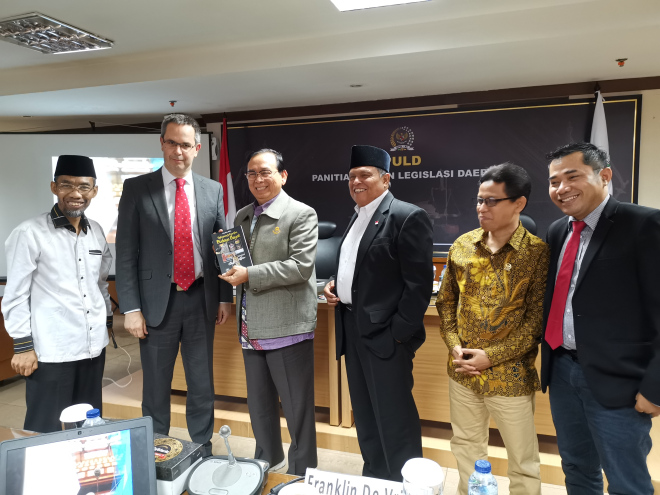 Working with different stakeholders in Indonesia, the objective of improved human rights compliance of local regulations through PLS thus becomes a joint effort involving the sub-national assemblies and governments, the Ministry of Home Affairs, the Upper House, Universities, CSOs and WFD. We count that this will contribute to, as Lord Norton pointed out, meeting the public’s expectations of parliaments’ legislative success, and thus better governance.

Franklin De Vrieze is Senior Governance Adviser, at the Westminster Foundation for Democracy. Follow him on Twitter: @FranklinDVrieze